Naturevolution launched in 2018 a pilot project for development of beekeeping in villages located on the perimeter of Makay massif in Madagascar.

This project has the support of theMicro Projects Agency and other partners, for which we are seeking additional funding, has two main objectives: first, to form the first beekeepers and artisans, and first sales network; secondly, gather the information needed to launch a project of greater magnitude. To better understand this whole project, we offer here an opening on the beekeeping world Malagasy. 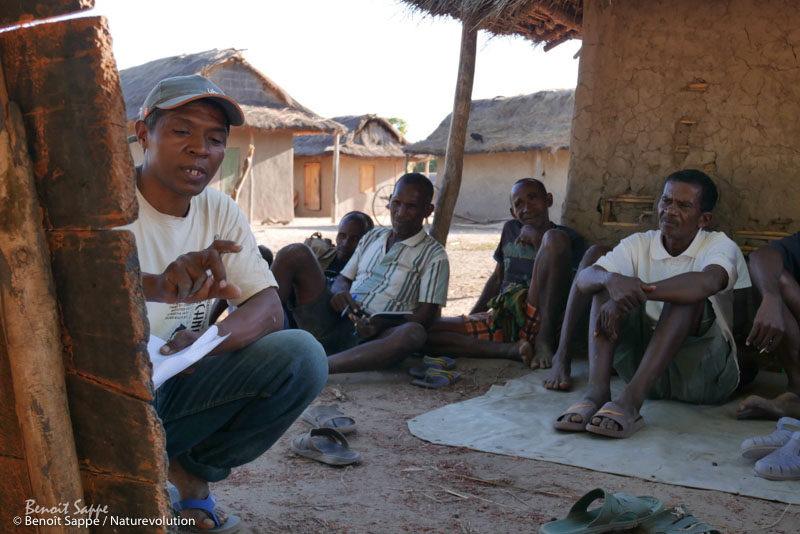 Presentation of the beekeeping project in the village of Tsivoko.

The bee of Madagascar

Madagascar is well known for its exceptional endemismWith a rate exceeding 80% for insects and even close to 100% for some groups. The bee of Madagascar is no exception to this rule with theApis mellifera where. unicolor, Endemic subspecies of the 28 sub-species ofApis mellifera known in the world.

It is characterized by a dark uniform color and has a small hair all over the body (Ruttner, 1975). The workers of this variety Bee are among the smallest of its kind while on the contrary the male has relatively large (Ruttner 1987). It participates not only in the pollination of a large part of the local flora endemic to Madagascar but also major food crops or export such as lychee.

According to a study INRA and CNRS, 35% of global food production is directly dependent on pollinators. The value of insect pollination service was estimated at 153 billion eurosOr 9.5% of the value of world agricultural production. 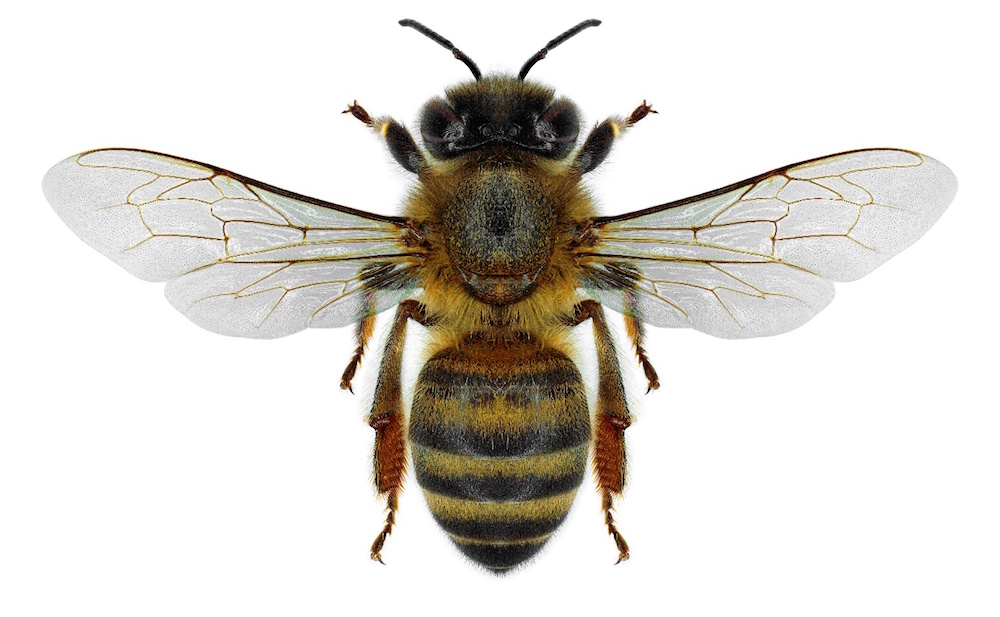 History of beekeeping in Madagascar

To return the issue of the quality of honey, It is measured for its water content and the desired percentage is less than 21%. The purity and good filtration of the product are also sought. The difficulty in answering this quality standard in Madagascar lies above the low level of training beekeepers a high illiteracy rate and the necessary compliance with international standards for honey extraction conditions (Honey approved). 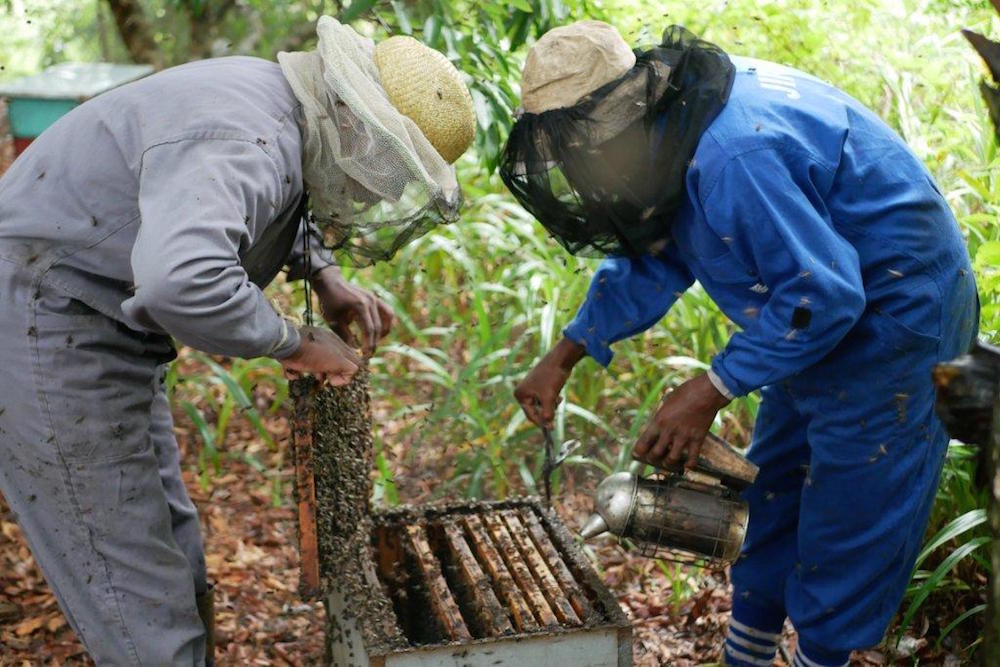 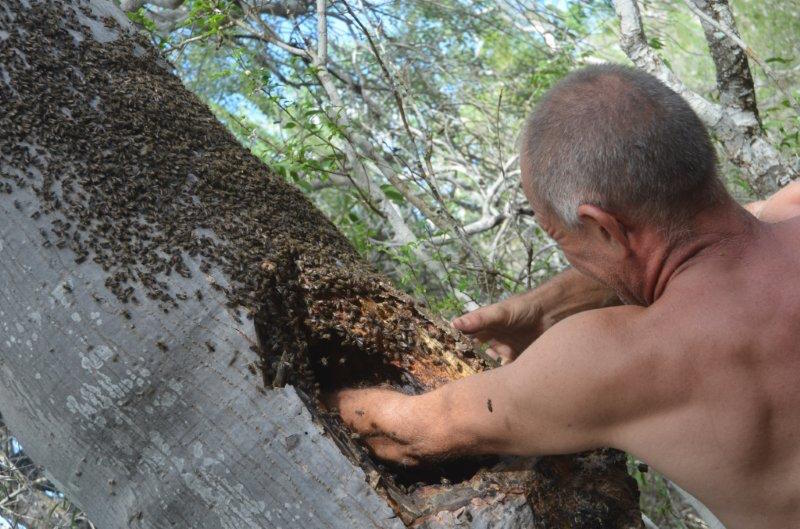 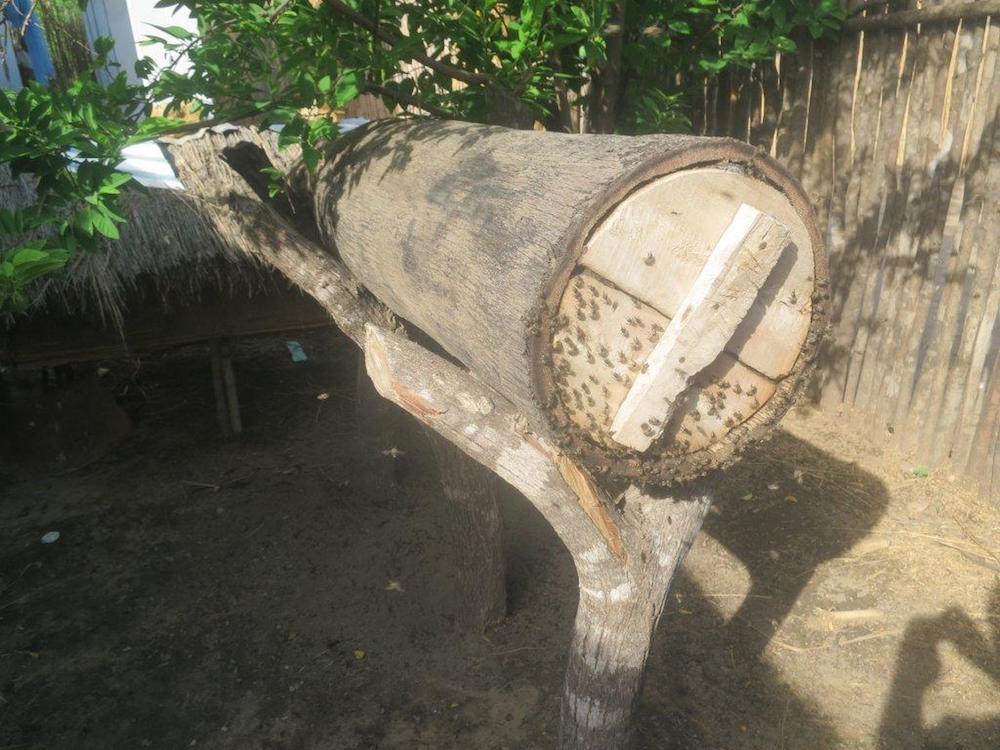 A traditional hive is installed in the village of Beroroha (South Makay). 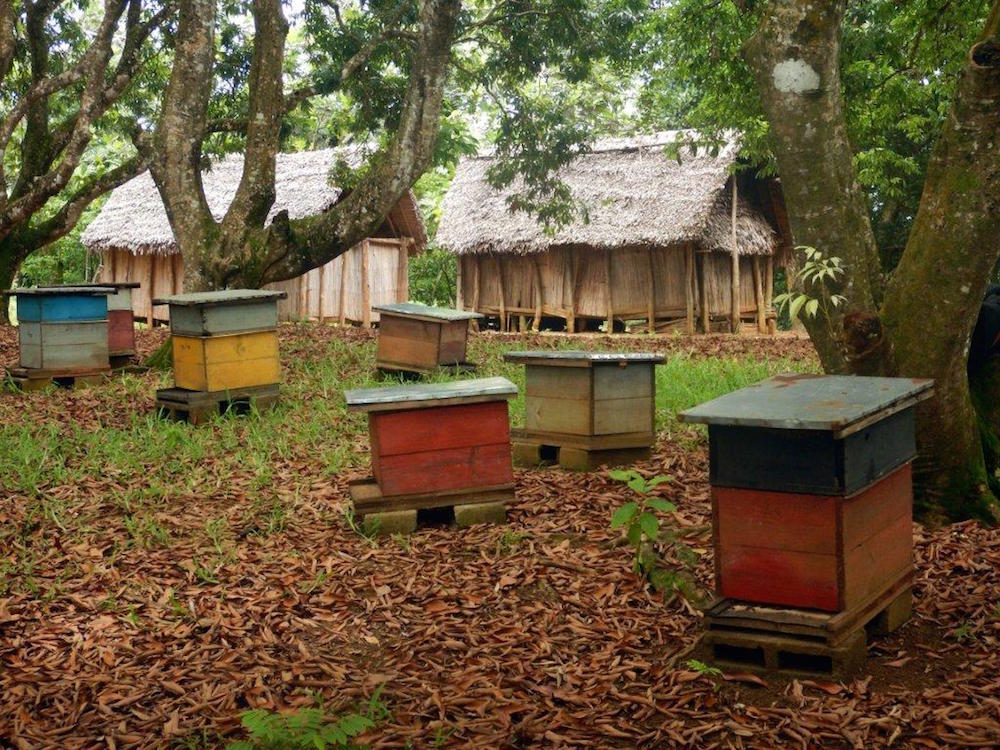 Hives used to Madagascar
In addition to traditional hives built from tree trunks, found in Madagascar mainly 2 types of modern hives, ruches Dadant and the ruffles the Langstroth. 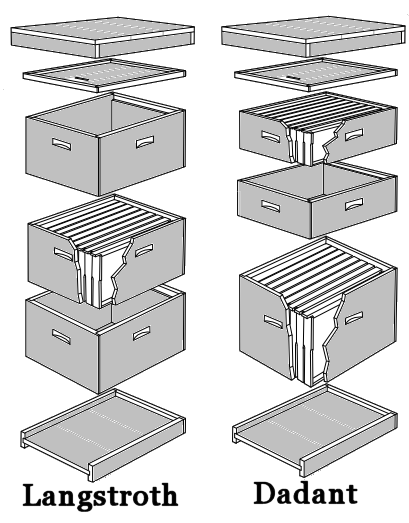 The eternal debate between beekeepers relates to the comparison between the "Langstroth" hive or the "Dadant" hive and Madagascar is no exception to this rule, to which must be added regional modifications ("Bourbon" hive). The hive body of the first is smaller and therefore more manageable but offers less food to the colony for periods of scarcity. The honey supers are larger for the “Langstroth” hive but it is easy to put two or three supers on a “Dadant” hive body.

In Madagascar, a hive produced between 10 and 60 kilos of honey per year from the force of the colony but also in terms of the quality of the honey environment and the weather. In the East, beekeepers perform four honeyed year (niaouli, polyfloral, macaranga, litchi).

The benefits of beekeeping in Madagascar

Beekeeping is very present in the Malagasy culture and widespread throughout the country. Honey there has a very good image and is traditionally used to replace sugar, therapy and cosmetology. 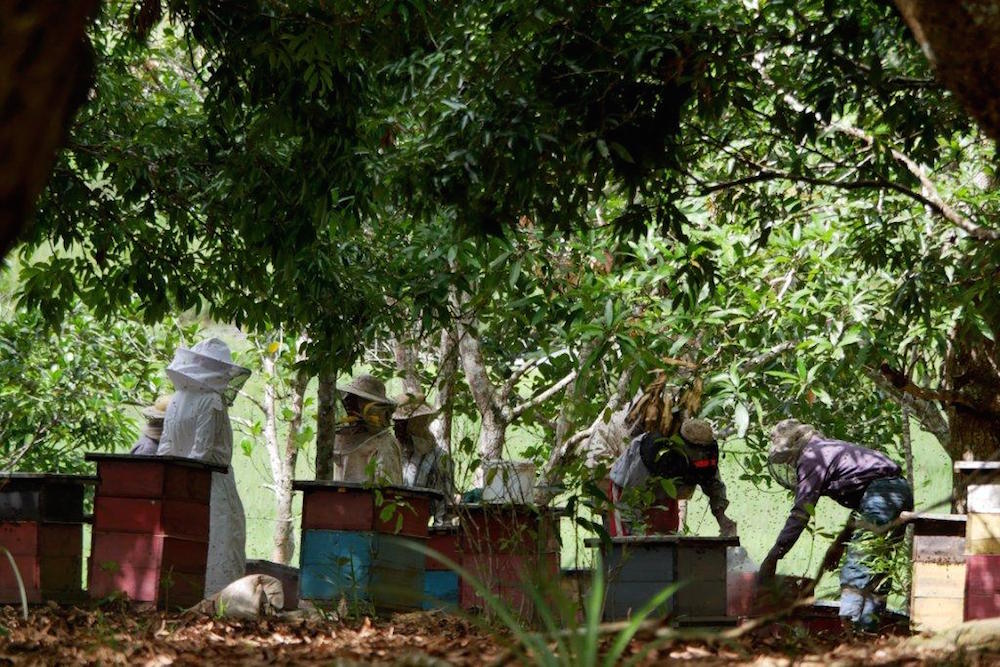 Constraints to development of beekeeping 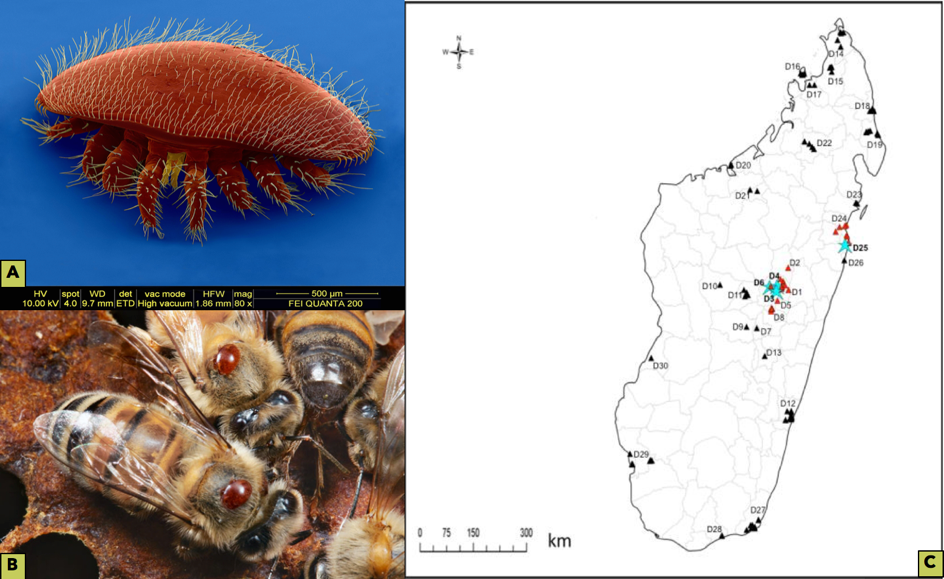 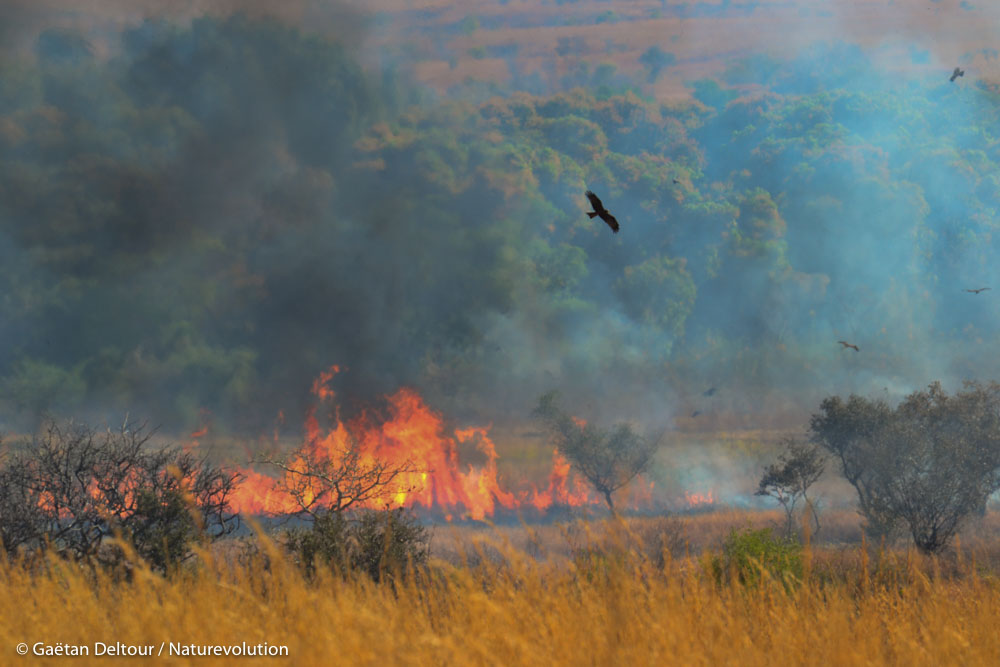 Bush fire in the massive Makay

There is a strong demand in the domestic market for high quality honeyThat the current production can not satisfy. picking products are often of poor quality, dirty or added water, and are intended for undemanding consumers and low income. Moreover collectors, merchants and restaurateurs of the island are looking for quality honeys.

Beekeeping in the Makay

In the Makay massif, forest honey is polyfloral. The outskirts of villages, it is dominated by fruit trees, mainly citrus. Good water quality and multitude of natural storage points facilitate the work of bees and improve the quality of honey.

Historically, hunter-gatherers in the region will take honey in tree cavities or rock. This technique is destructive because it jeopardizes the survival of the entire colony, depriving it of all its reserves and, sometimes, accidentally killing the queen.

The launch of a beekeeping project in the Makay region from the simple observation of thecultural significance and traditional honey, an empirical know-how of swarm gatherers and honey hunters, the beekeeping potential of Makay, but also the success of the ’exploitation of small family apiaries despite archaic and ineffective means. The project is also based on an interregional cultural exchange (East / West) with regions that have already developed modern beekeeping, such as that of Manakara.

The beekeeping in the service of conservation Makay

Objective 1: To improve family incomes
The peasants bordering the Makay massif are still looking for alternative income which would allow them to buy basic necessities to make the vital and nutritional link during the period of welding between two harvests. The current consequences of this lack of additional income are poaching, particularly by lemurs, and the increase in bush fires for the breeding of zebus. It is also only with better living conditions that local populations will be able to access education, better health and food, and ultimately to care for their environment.

Beekeeping contributes to providing a new source of income, even an alternative for farmers practicing rice cultivation and zebu breeding.

Objective 2: The preservation of the environment.
The development of beekeeping in the Makay, as in other protected areas around the world, aims to educate local communities awareness of the need to preserve the forest, vegetation and streams. The different regional analyzes that have been conducted show that beekeeping is an economic activity that educates effectively to the preservation of natural resources since it depends directly.

Among current api-gatherers, for whom the sale of honey is therefore an income, the objective is to aim that the swarms are not destroyed or felled trees during harvest or even help them make the transition to modern beekeeping, recipient quickly transition their business. For all beekeepers, training focuses on the link between honey production, quality, and the health of the environment, Leading thus in turn become actors of environmental protection in the villages.

It is however necessary that beekeepers can access to a market of sufficient size to sell the products, that the isolation of the Makay has so far held back. The mastery of the inherent Naturevolution Madagascar complicated logistics Makay is the key factor that makes today the realization of such a project linking the villages of Makay and the rest of the country.

> Learn more about beekeeping pilot Naturevolution that develops in the first villages Makay.

You too can support this project
on our Crowdfunding Campaign !