Naturevolution > Where do we work? > Madagascar > The Makay > Biodiversity

Madagascar is characterized by its particular context) by its rate of endemism, ie the amount of species who, among all species in Madagascar, cannot be found elsewhere in the world.

Macro-endemism first : the average endemism level is 75% and can reach over 90%, not only among the vertebrates (like the mammals, birds, reptiles and amphibians) or the flowering plants, but also among the invertebrates. A striking example is the endemic level of 97% among the continental mollusks.

Moreover the species within the different groups show limited geographic range and a distribution across the different ecosystems of Madagascar : savannas, wetlands, thorn forests, deciduous forests and tropical forests. This micro-endemism is especially remarkable for the lemurs with around 70 species and sub-species, most of them micro-endemic. 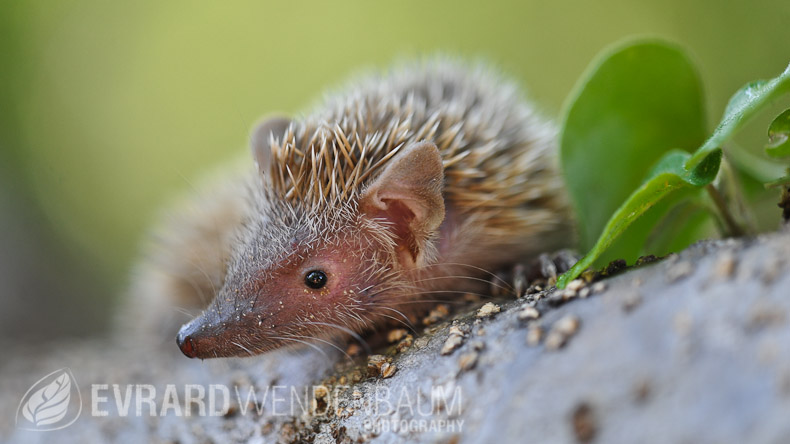 A Tenrec trying to look inconspicuous on a branch in the Antsoha forest. Makay range, Madagascar.

Moreover, among the 70 species of lemurs, 21 species have been described over the last decade and a dozen is awaiting description. And, since the early 90s, 111 amphibian species were discovered and described, about 244 currently known in Madagascar. A discovery rate three times higher than that recorded in the world for this group.

In addition, a recent study showed that species richness in Malagasy amphibians reach 465 species, nearly double what is currently known.

This accelerated increase in knowledge shows that the current inventory of Malagasy biodiversity only mirrors a fraction of the natural reality. And if we reckon that vertebrates amount only to 2.7% of the planet's biodiversity, we have all reasons to assume that there is a huge reserve for new discoveries among the invertebrates. The discoveries are mostly to expect among the insects, arachnids, mollusks and nematodes, and in the ecosystems the least studied, this due to various reasons : financial, political, difficult or perilous access, etc.

This endemic cute little frog has inadvertently landed on the head of the ornithologist during one of our missions in the Makay range.