Naturevolution > Where do we work? > Indonesia > Konawe > The threats

Although the the Konawe karsts have until recently remained largely intact, for several years now they have been facing threats directly related to human activities. The northern foothills of the Matarombeo massif have given way to palm oil plantations, some parts of Matarape Bay have been razed by mining companies exploiting nickel, and the lack of a waste management system in the region gives rise to heavy pollution of the ocean by plastic waste.

Some of the threats described on this page have already begun to impact negatively on the massif, while others will only really be felt in the medium term if steps are not taken to mitigate them. The good news is that there are ways to counter or limit these impacts . More details will be posted soon but you can find the outlines of our conservation strategy for Konawe karsts. The outskirts of the Matarombeo massif are threatened by the development of palm oil plantations.

The worldwide boom in both demand and production of palm oil has led to an explosion of oil palm plantations in recent years. This development has occurred largely at the expense of the primal forest , as on Borneo and Sumatra which just 20 years ago still housed many such virgin forests.

In the last hundred years, 80% percent of Sulawesi’s forests are estimated to have disappeared . Far from slowing down, plantation development is now spreading into more difficult-to-access areas which are often the last remaining reservoirs of species.

In the Konawe, the northern part of the Matarombeo massif already includes plantations that eat a little further into its surrounding forests each year. It is also likely that residues of plant protection products (pesticides and fertilizers) used on plantations are runoff to rivers and then to estuaries, where they add to the pollution and disruption of the mangroves and underwater ecosystems of Matarape Bay. 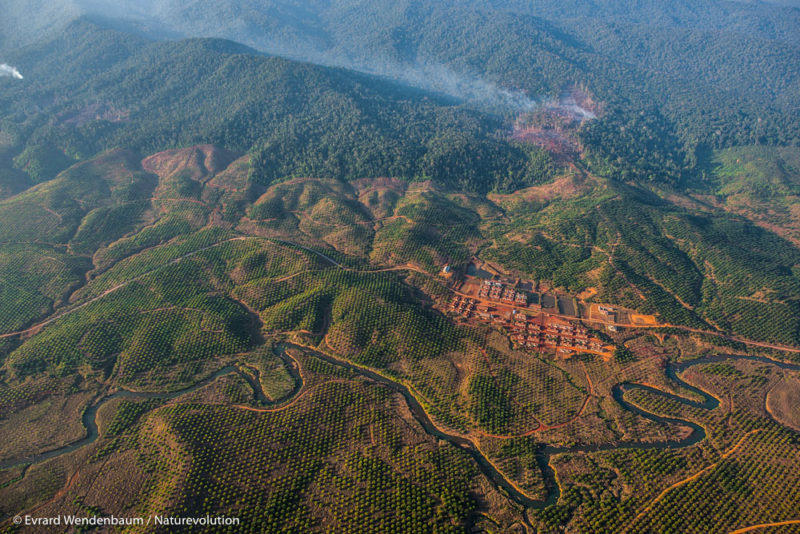 Indonesia’s dearth of infrastructure and lack of environmental education, in the context of its dense population and recent rapid development, has led to many areas lacking waste management facilities . As a direct result, the country’s rivers are extremely polluted. Indonesia is currently the world’s second-largest emitter of plastic waste into the ocean.

The coastal area of Matarape Bay is no exception. Most of the village waste is tossed directly into the sea which, depending on tides, currents and storms, is then scattered along the coast. The damaging effects of plastic waste on the environment are numerous: marine animals confuse it with food or get trapped in it, it creates coral diseases, and in the long term, the waste breaks up into micro-plastic pellets that will take centuries to decompose. 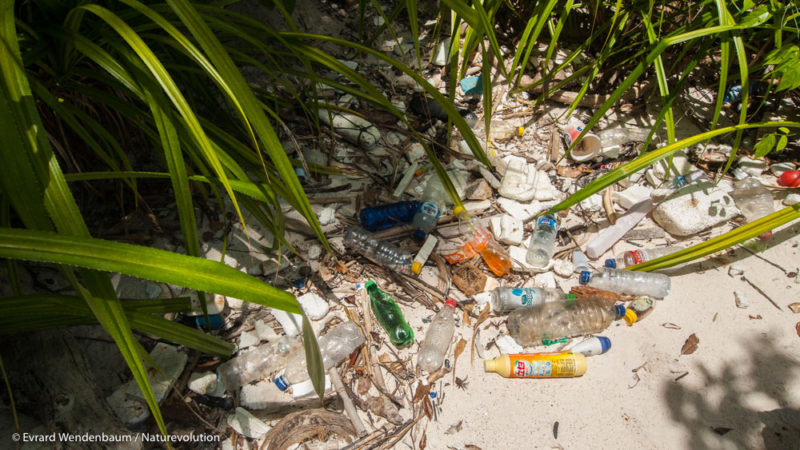 The coastline of Matarape Bay has become the site of several open-pit nickel mines. The operation involves mainly the superficial layers of the soil. Once ore extraction is complete on an area, the forest has disappeared, the soil has no structure, cohesion, or micro-organisms left, and the adjacent seabed, which include many coral reefs, is ravaged by the flow of sediments, particularly in the rainy season.

The mining companies carryint out the exploitation of mineral deposits in Konawe district do not create sediment ponds and do not perform any post-exploitation restoration of the mining sites. Almost none preserves the topsoil, the superficial layer of fertile soil, to replace it after exploitation of the site, as regulation requires. Previously exported crude, the ore must be processed in Indonesia since 2014, but many companies get exempted to this rule. The island of Sulawesi, and particularly the region of the Konawe, has a high potential of nickel ore, hinting at a potential decades-long exploitation in the future. 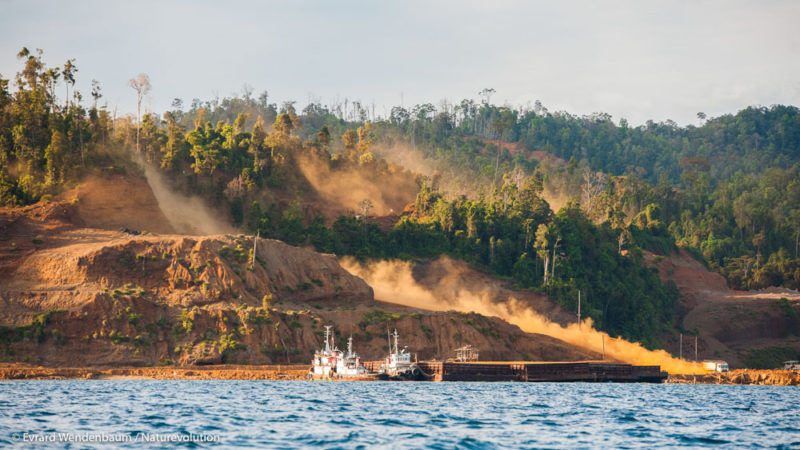 The exploitation of nickel mines in Matarape Bay, Sulawesi Island.

The Acanthaster or "Crowns of Thorns" starfish

Known as the "crown-of-thorns starfish " (CoTS), the starfish Acanthaster Planci is a predator of coral polyps. In a healthy ecosystem, it plays a cleaning role in eliminating sick corals from the reef and controlling the population of fast-growing coral species. Extremely fertile, a single starfish can release millions or even dozens of millions of eggs in a single spawning event, the vast majority of which do not survive.

For reasons that have yet to be specified (global warming, run off of fertilizers used in intensive agriculture, coastal development and mismanagement of wastewater, overfishing of predators, etc.), population outbreaks of Acanthaster Planci (COTS) are causing real damage to coral reefs around the world. Many research programs, including in Australia’s Great Barrier Reef, are underway to build an understanding of this phenomenon. Several population outbreaks have been observed since 2017 in Matarape Bay. 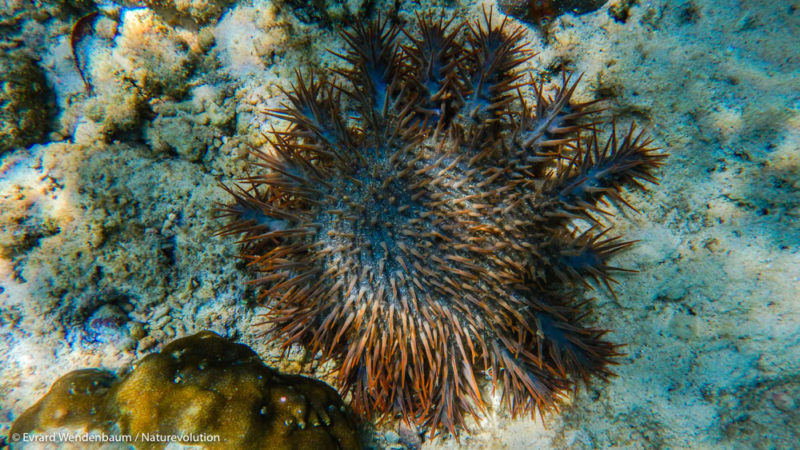 For reasons that are yet to be clearly understood, the starfish Acanthaster Planci or "crown of thorns" experiences noted proliferation phenomena. Matarape Bay, Sulawesi.

Still little known, the bay of Matarape currently hosts only two or three accommodation options and remains almost untouched by visitors. But it's only a matter of time before this beautiful spot, already nicknamed " Little Raja Ampat "got 'discovered' and start to appear on blogs, guides, and local travel agencies. Local tourism development has already sped up in 2018. Among the negative consequences this entails: the waste tourists leave on the beaches, and boats anchoring directly on the coral. 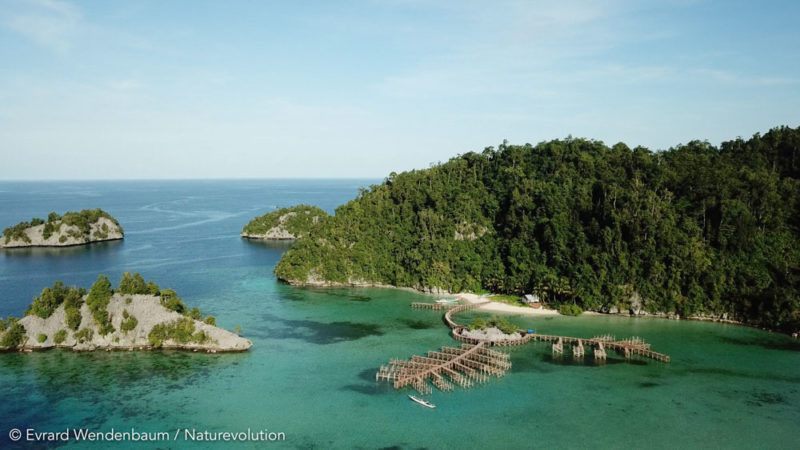 To prevent damage to the site by the erratic development of infrastructure, the destruction of coastal and underwater ecosystems by expanding tourism, and profiting of the local population from this development, a lead must be taken to establish the site’s protection status, raise awareness among the local people of its richness and fragility, and guide them in sustainable ecotourism practice. Tourism could then play a key role in enhancing outcomes for both the residents and their natural environment. 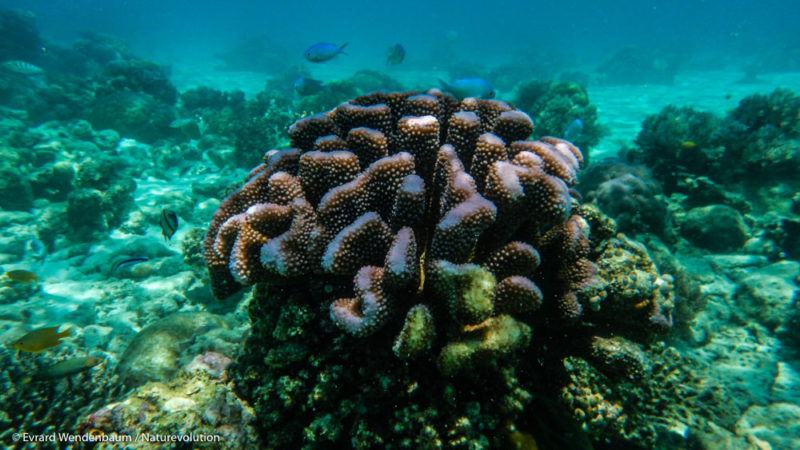 Coral in Matarape Bay. The seabed and in particular its corals may soon sustain damage through the growth of tourism and thus the frequency of boats. Matarape Bay, Sulawesi.

Very common in Southeast Asia, dynamite fishing is also common in Matarape Bay. This consists of the fisherman throwing a homemade bomb into the water which, by exploding, indiscriminately kills marine life within a 50-70m radius, including juveniles, marine mammals, and coral. A series of successive explosions make it very difficult for a given reef to recover. Despite the damage to underwater wildlife and the risk of local collapse of fish stocks, this fishing technique can be very profitable in the short term.

Potassium-cyanide fishing is also widespread because it allows the capture of live reef fish popular in Hong Kong and Singapore restaurants, such as Napoleon or groupers, (see this excellent photo reportage and this movie from photographer James Morgan on the Bajaus of Sulawesi and on reef fish harvesting). The coral located in the vicinity of the chemicals dies. Overfishing is also a problem with industrial fishing vessels (below) fishing illegally near the coast, including in areas theoretically protected. 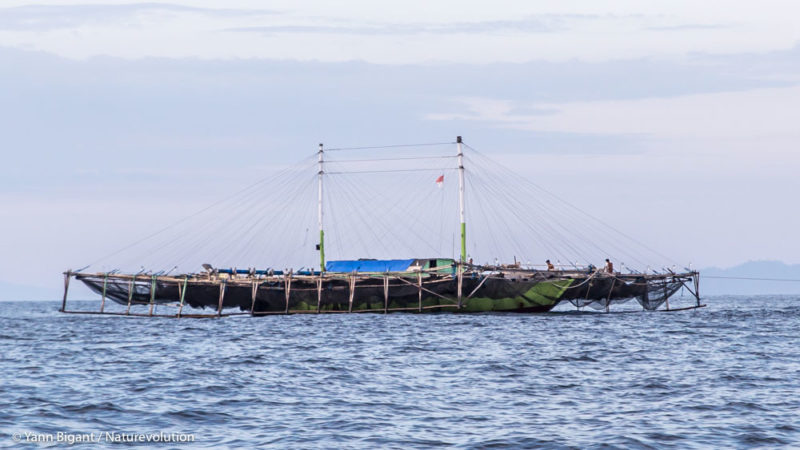 The karstic rocks themselves are also the target of industrial exploitation, in this case of cement. Previously protected by the forest which made their exploitation expensive, its disappearance and the construction of roads for oil palm plantations is rendering the karsts increasingly vulnerable. Throughout South-East Asia, karst complexes are being exploited one after another until eventually these impressive vertical reliefs will become mere memories. This threat, although still distant for the karst of Matarombeo, could one day become a reality if protections are not put in place within the next decade.

To find out more