Naturevolution > Where do we work? > Indonesia > Konawe > Biodiversity

The island of Sulawesi represents the largest land surface of Wallacea, spanning 175,000 km² out of the 340,000 km² total area. It houses a spectacular natural heritage, through a mosaic of habitats - coral reefs, mangroves, karstic massifs, virgin or old-growth forests - in which 98% of mammals, 1/3 of birds and nearly 80% of amphibians are endemic, meaning that they are not found anywhere else.

The karsts, arks of biodiversity

The karsts constitute biotopes sheltering true arks of biodiversity, given the distinctiveness of their flora and fauna, and the multitude, fragmentation, and isolation of their habitats. These habitats exist within geological domains with drastically different ecological requirements. Some groups of plants and animals with low capacity for dispersion have hence undergone evolutionary radiations that are hyperdiversified and specific to karstic environments.

Unfortunately, karsts are in danger from humans. Protected in the past by inaccessible forests, recent deforestation and demand for natural resources have led to the exploitation of their limestone by cement plants, particularly in South-East Asia, which has the highest quarrying rate in the world. 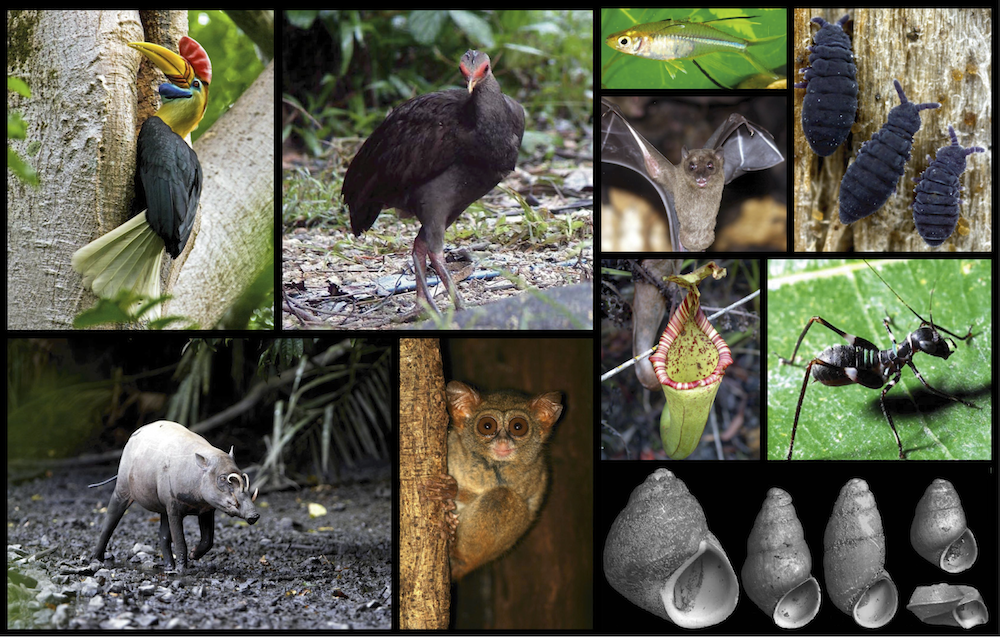 The island of Sulawesi boasts remarkable fauna including the knobbed hornbill (Aceros cassidix, top left), the Maleo (Macrocephalon maleo, center-top left), the Babirusa (Babyrousa babyrussa, lower right) and the Spectral tarsier (Tarsius tarsier, center-bottom left). These species are endemic to Sulawesi and/or neighbouring islands and are on the IUCN Red List of Threatened Species. On the right are a freshwater fish, a bat, a springtail (collembola), a tropical pitcher plant (nepenthes), a grasshopper, and water snails (Hydrobia gastropod).

Sulawesi, the heart of the coral triangle

The coral triangle is considered the epicenter of the planet's marine biodiversity. In this 6 million km², there is more biodiversity than anywhere else in the world : it hosts 76% of coral species, 35% of coral reef fish, and 6 of the 7 species of marine turtles indexed across the globe.

At the heart of this coral triangle, the island of Sulawesi is equally under threat. Experts agree that 40% of coral reefs around the world have disappeared in the last 30 years due to climate change and human activity. 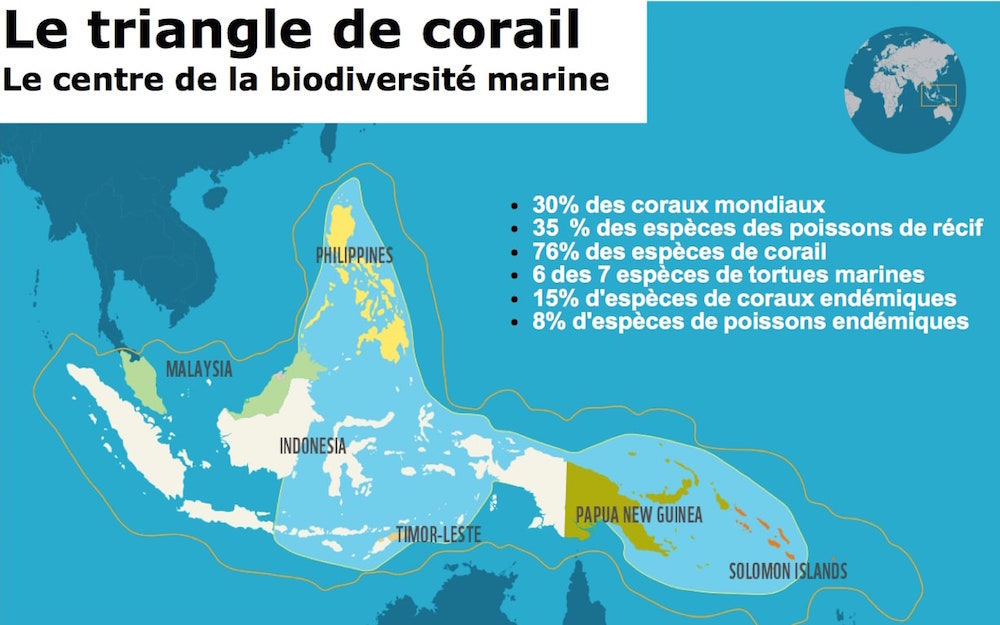 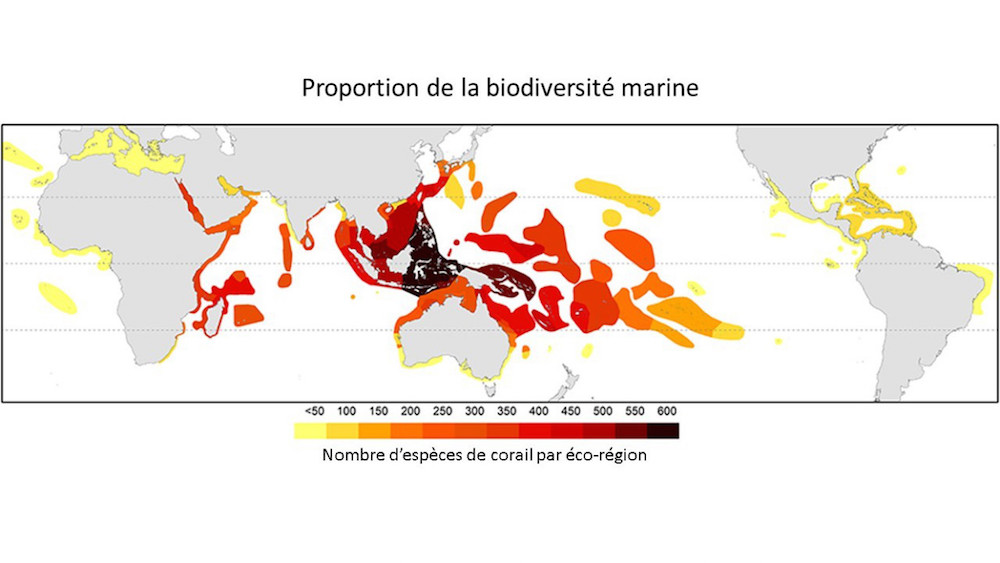 Indonesia is home to the largest stretch of ​​mangroves in the world. As well as hosting an abundance of biodiversity, these provide irreplaceable services to the ecosystemIn particular, they limit coastal erosion and protect coastal areas by serving as a buffer zone against cyclones and tsunamis. In addition, they sequester a substantial amount of carbon that scientists are only beginning to measure. However, their area has shrunk by 30% over the last three decades and continues to decline at a rate of 1 to 2% per year, mainly due to the expansion of shrimp farms and coastal infrastructure.

Overall, only 15% of Wallacea’s original natural habitats remain. With regard to biodiversity, more than 10% of its mammals, birds and amphibians are on the IUCN Red List of Threatened Species. Nonetheless, deforestation and expansion of plantations in Sulawesi have not yet reached the same proportions as in the islands of Sumatra and Borneo, and pockets of intact forest still exist. This means potential exists for creating large protected areas rich in the biodiversity so specific to Wallacea, particularly in the Konawe area where Naturevolution is undertaking conservation work. 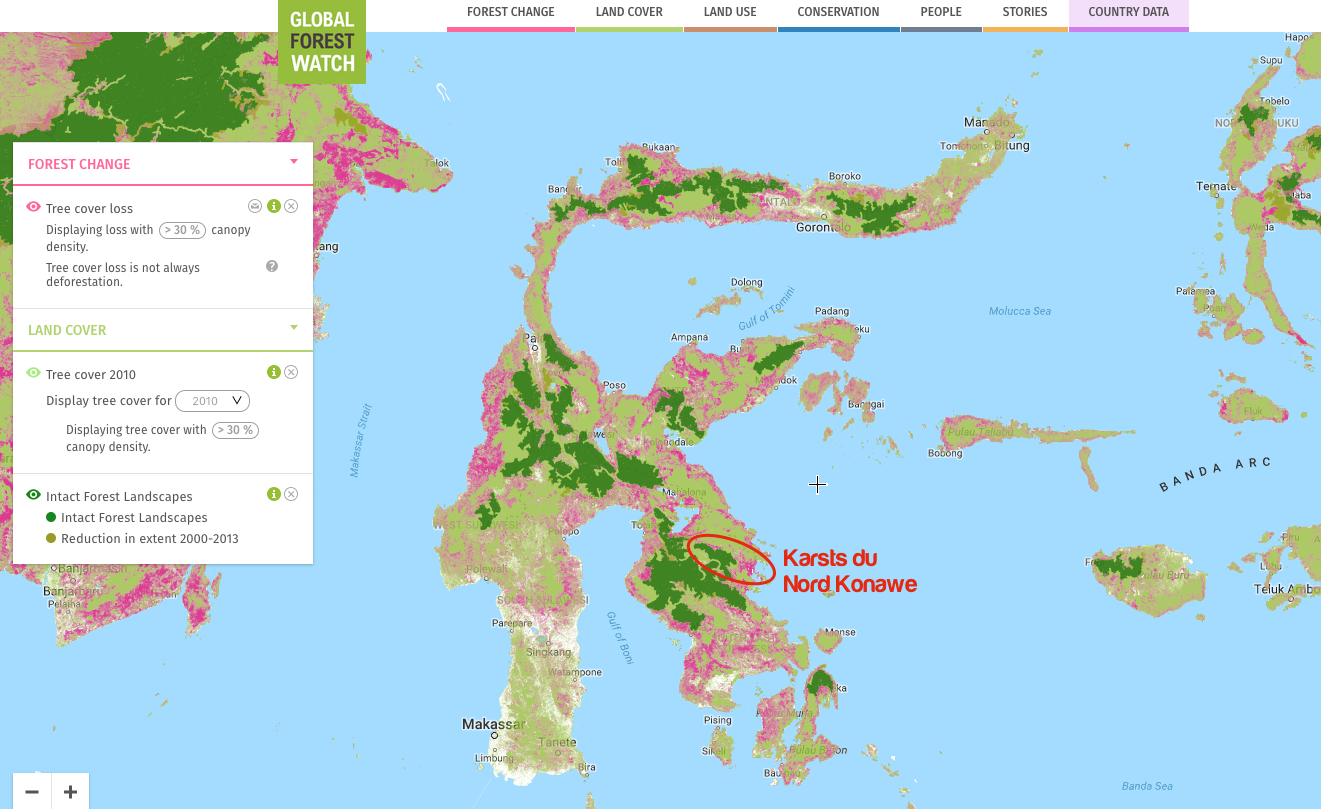 The intact forests of Sulawesi Island (in dark green); i.e., regions of forest untouched by humans in recent times, and sufficiently large and unfragmented to provide habitats for all of their native biodiversity, including species that require large areas. Map © Global Forest Watch