After launching in 2018 a Beekeeping Pilot, Naturevolution start a reforestation project near the villages of Makay: village forests. But we could start this project without first explaining how it fits in the specific context of Makay and a worrying global context. Through 6 items we take stock of the current state and causes of deforestation in the world, in Madagascar and Makay on what governments are doing to fight against on reforestation initiatives around the world Madagascar, and finally on the most impactful actions an individual can take to fight against deforestation. An entire program !

The phenomenon of deforestation caused by the development of human activity is not new. Long before the development of agriculture, Wise man had a considerable impact on forests, but the low population density and mobility of the hunter-gatherer allowed the forests to regenerate to a certain extent.

However, that massive deforestation continues in the 21st century in a context of scarcity of forest area rich in biodiversity, extinction of living crisis and fast global warming is extremely worrying. Considered "out of control" in many countries of the world, the current deforestation would it not the result of our choices in life?

The phenomenon has even worsened in some countries. In Brazil for example, where deforestation had however declined dramatically until 2012Thanks to political will (due in particular to the expansion of protected areas) and the use of satellite imagery, she left with a vengeance.

In the month of June 2019 a significant acceleration of the Amazon deforestation was reported byNational Institute for Space Research of Brazil "Sulawesi, expedition to the heart of the mystery island" in replay on Arte In one month is 920 km2 of rainforest disappeared. End 2019, INPE notes that Deforestation in Brazil has doubled in 2019 compared to 2018, a direct result of the messages of the Brazilian president. A decline does not bode well for biodiversity and indigenous peoples precisely when the European Union has signed a free trade agreement with South American states (Mercosur), a qualified agreement " complete contradiction with our climate ambitions "By Nicolas Hulot. 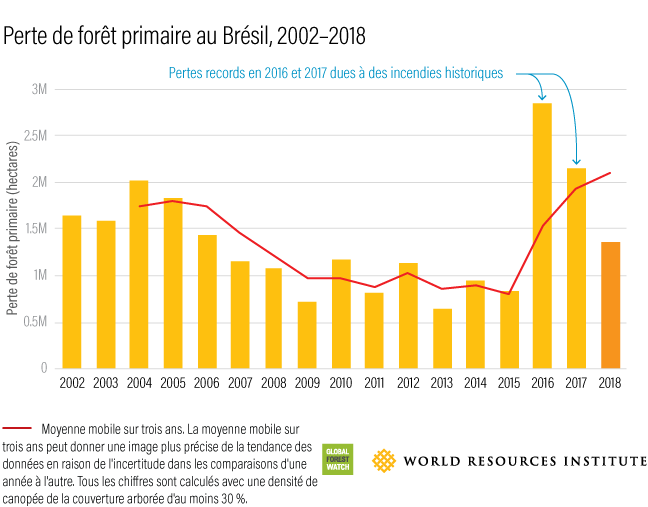 What are the numbers?

according to the annual report by Global Forest Watch, the world has lost in 2018, 12 million hectares of tropical forests, including 3.64 million primary tropical forest equivalent to Belgium! This is the fourth worst year in terms of deforestation of the rainforest, after 2016, 2017 and 2014 since the first recordings in 2001. 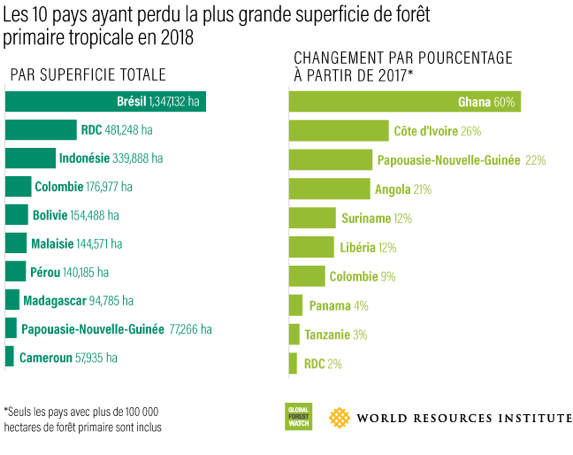 The countries most affected by deforestation are Brazil, Indonesia and the Democratic Republic of Congo (DRC) - three countries that concentrate nearly 60% of tropical forests of our planet. Some forests have long been spared because of civil wars that lasted several decades, as in Colombia, DRC or Myanmar (Burma), but with the end or slowing these conflicts, these forests are seen as so many new opportunities operating.

Caution in interpreting the figures! You may have heard about a 88% increase in deforestation in Brazil at least June 2019, or 278% in the month of July 2019 in the press. We recommend theMongabay article that explains how the interpretation of these figures by the media is not accurate and helps Brazilian President Bolsonaro to question scientific institutions.

According to the Report on the Global State Forestry published by FAO in 2016, near 80% of global deforestation is caused by agriculture (30-35% for subsistence agriculture and 45-50% for commercial or industrial agriculture) and 20% by infrastructure construction, mining and urbanization. But the causes of deforestation are radically different from one continent to another.

South America
If we look again for Brazil, the causes of deforestation in 2018 were to 65-70% the creation of pasture for livestock (Brazil exports many beef) and 25-30% for agriculture (Including export soybeans to China and Europe for their farms). Logging is only a small portion of deforestation. 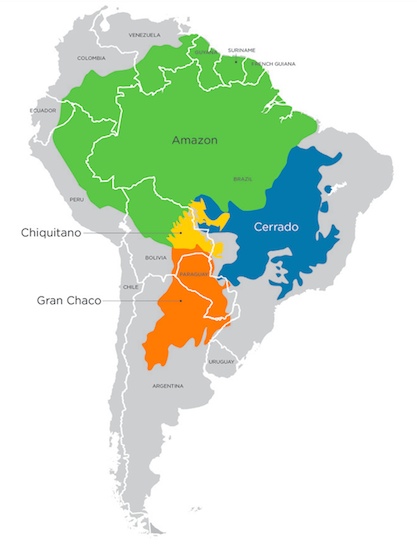 The situation is similar in other countries (Bolivia, Peru, Colombia, Paraguay, etc.) and does not concern the Amazon basin. Less known, the September 22 and Closed are increasingly affected by deforestation. 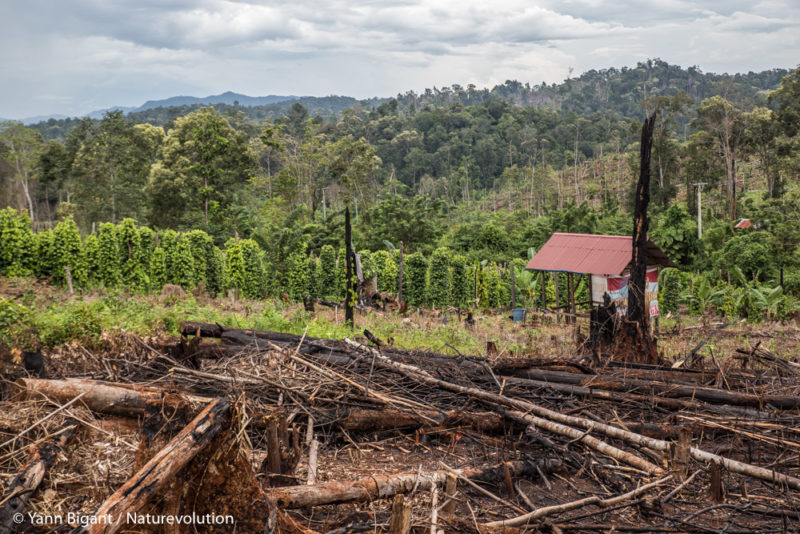 Pepper plantation on the island of Sulawesi, Indonesia.

Africa
Unlike Asia or South America, Africa undergoes deforestation whose main causes are not linked to commercial agriculture. The majority of African deforestation is grown by small farmers who produce local subsistence agriculture. This is particularly the case in Madagascar, where deforestation is caused by the clearing of forest for slash and burn (Exhibition “Makay, a refuge in Malagasy land” at the Musée des Confluences) Or for the production of charcoal for cooking.

But this is changing. For ten years, the forests of Central Africa and West Africa are seen as the 'El Dorado' of industrial agriculture, where virgin forests are replaced by plantations to meet demand commodities in the international market. The forests of the Congo, Cameroon and you Gabon are threatened by the expansion of palm oilAnd, in the Ivory Coast and Ghana, it is even in protected areas that is deforesting for the export of cocoa. 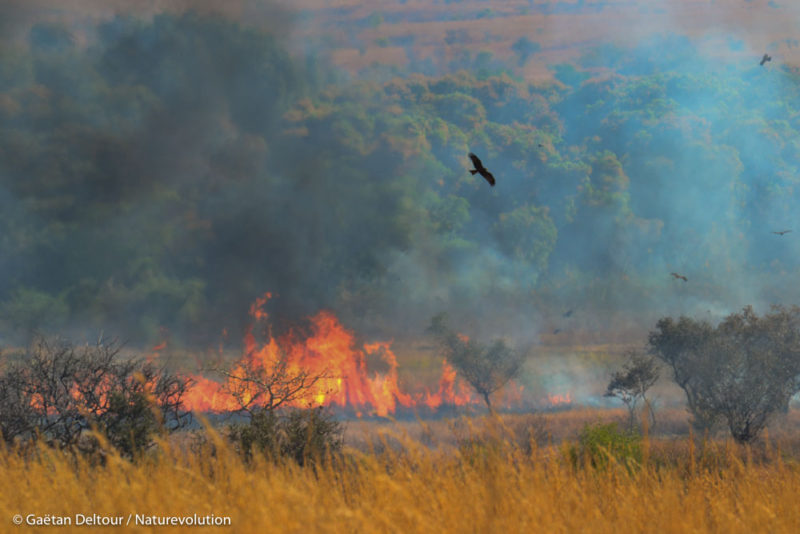 Bushfire in the Makay massif in Madagascar.

What prospects for the future?

The future is bleak ad for large tropical forests and their biodiversity. Subject to numerous local anthropogenic pressures (deforestation for agricultural expansion, degradation by logging, poaching), to which is added that of climate change which increases the risk of fires and requires species to move rapidly (300 meters / year), it could remain the great tropical forests fragments severely degraded at the end of the century.

Facing thegovernment inaction for deforestation, it is urgent to act and how many are. One more you said in this article: How to act against deforestation?

I support the project Naturevolution

Initial funding to the tune of € 10,000 was obtained from Ermada - Sale of Malagasy handicraftsEnabling the launch of Village Forestry Project. Maltem is an ecosystem of specialized consulting companies in the digital transformation and sustainable innovation, and a partner of Naturevolution since 2016.

The entire series of articles

An article proposed by Gaëtan Deltour and Yann Bigant